Mendooran is a small town along the Castlereagh River in Central Western New South Wales. We stayed in the rest area just behind the police station and along the river bank.

The Mendooran Rest Area is very large, with plenty of flat ground and big shady trees. Perfect for any type of travelling setup. There was plenty of water in the river, however not quite following enough to make it acceptable for swimming at this time and entice us in for a swim. There is male and female flushing toilets, plus also a cold shower in each. A very nice setup for a FREE CAMP. 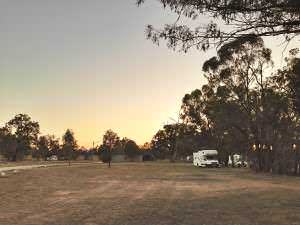 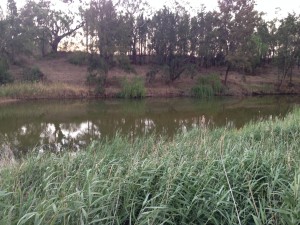 There are also a few tables, fire pits and bins. Dogs must be under the owners command at all times, as one of the signs states.

There is a small water tank with two taps. One labeled as river water and one labeled as tank water, although this was hand written in black texta. There is also a garden tap outside the toilet block that has several hand written messages next to it. One more recently written said “free council water” another said “do not attach hose”, plus other unreadable text. To play it safe we did not top up our water tanks at this stop.

The Mendooran Rest Area really is a beautiful pet friendly place to stop. We arrived at Mendooran after driving through some extremely dry areas. So didn’t expect much at Mendooran. The river had plenty of water in it and was a wonderful playground for the local bird life.

We found one of the vacant oversized shady trees near the end of the camp site to allow us plenty of room for the dogs and to run the generator without imposing on anyone’s serenity.

It was a 39 degree day, but felt like 49 degrees while setting up with the hot breeze. This is when we learnt one of our most expensive Naive Nomad lessons so far. We had started the Ryobi RIG1000 generator when we first got to our site. After about 30 mins, the genny conked out as if it had run out of fuel, however we had only refilled it just before we started it. So that wasn’t the issue. Upon inspection, we noticed a electrical smell. The inverter had fried. Turns out you should never run a genny on a extremely hot afternoon. We restarted her after about 20 mins and she started first time no dramas, but sounded terrible and would not charge anything. After testing a few items and turning to some well travelled grey nomads for advice, we came to the conclusion that we had killed one of our our most expensive and most important travel items. After more advice from several grey nomads, we have since purchased a Honda generator.

After our total Naive Nomad afternoon and filled with devastation regarding the generator, I went to investigate the free shower. The shower is a large cubical with a concrete floor, it is cold only, the lock on the door is broken, but most importantly it is clean and was one of the best showers I have ever had. It made a bad, stinking hot afternoon a lot better. 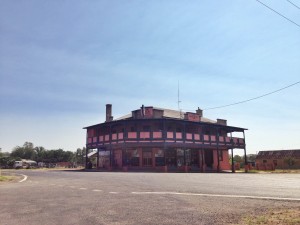 In the afternoon while enjoying a cold beer, we had a great time watching all the bird life dance around the river. Around 4am the next morning, we didn’t quite have such a warm and fuzzy feeling regarding the 50 or so noisy Cockatoos.

Mendooran is only a very small place, but from the rest area it is only a small walk to the village that includes a pub and a few other smaller shops.

Overall a great place for a night or two. I would imagine with a little bit of rain, the river would be magical.

Post Views: 6,218
http://www.naivenomads.com.au/wordpress/mendooran-rest-area/http://www.naivenomads.com.au/wordpress/wp-content/uploads/2014/02/Mendooran-Rest-Area-Castlereagh-River-900x675.jpghttp://www.naivenomads.com.au/wordpress/wp-content/uploads/2014/02/Mendooran-Rest-Area-Castlereagh-River-140x140.jpg2016-10-24T09:43:05+00:00JazzAustralian Camping DestinationsDog Friendly CampingFree Camping DestinationsState - NSW and ACTMendooran is a small town along the Castlereagh River in Central Western New South Wales. We stayed in the rest area just behind the police station and along the river bank. The Mendooran Rest Area is very large, with plenty of flat ground and big shady trees. Perfect for any...JazzJasmin Cunninghamjazz@back9media.com.auAuthorNaive Nomads