One of the benefits of living in a remote area is the vast amounts of open space all around you. Where we are in remote NT, there is literally millions of acres of cattle stations which are mostly closed and abandoned.

As a result many people here have motorbikes or quad bikes to go exploring or hunting with. Both of these would be out of the question for us as quad bikes and motorbikes are very expensive and we would have no way to travel with them.

So the obvious choice was some small off-road buggies. It may surprise you to know that it was actually Jazz’s idea to get the buggies. We started on eBay simply by typing off-road buggies. There are a huge range to choose from, most are too expensive and too big for us.

The ones we ended up getting are cheap, Chinese made and very small. We got them for about $750 each including having them freighted here.

We’re hoping one day we will be out to mount them on top of our camper trailer to travel with us.

They are 6 1/2 hp 4-stroke with a 200cc engine. There are no foot pedals. All the controls are operated with your hands. The hydraulic brake is operated with your left hand and the throttle cable on your right. There is also a kill switch on the steering wheel to stop the engine. 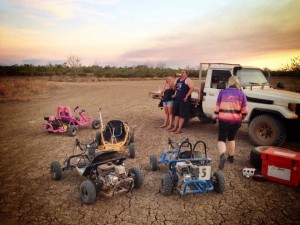 I am pretty sure they are exact replicas of Honda motors. But obviously not with the quality you would expect from a Honda.

The karts arrive 60% assembled in big cardboard boxes. They basically come in three parts that are already assembled. The front section with the wheels and steering mechanism already attached, the middle section with the seat, and the rear section already has the engine mounted, the rear axle, wheels and chain already connected. It’s just a matter of connecting a few bolts, adding some oil, some fuel, and then pulling the cord to start the motor.

The karts are really, really good fun. Using the Navionics iPhone app we have clocked our top speed at nearly 50 km an hour. That doesn’t sound very fast, but I can assure you when you are only a few inches off the ground with the wind in your face it feels twice that speed. 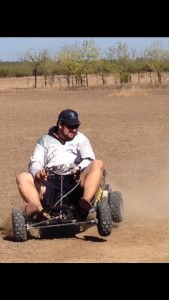 We have found an awesome area where we have started to make a track. It’s out in the middle of nowhere where we can’t annoy anyone. It’s a huge area of dried mudflats but obviously floods during the wet season. Each time we go out there the track gets a little bigger. This is because we go exploring and finding new places to add corners and extend the track.

We actually bought five of these karts. We have sold three of them to friends, who come out karting with us at the track. Two of us are big boys at around 140 kg each. When we first bought the karts we were a little worried that they were designed for kids and we would break them straight away. This has not been the case. We have had a few minor issues but in general we give these karts hell. We drive them to the limit and haven’t had any major damage yet.

There have been quite a few minor modifications done so far. The first thing to go on all of the karts was the chain cover. It’s rattled against the chain, which was noisy and probably dangerous. My kart received some racing stripes, another was painted pink and another had it’s muffler cut off. The one with no muffler is slightly faster than the rest however it is a lot noisier.

The first actual damage to occur was on my car in the first 20 minutes. A rear bearing practically exploded. As I mentioned earlier these are cheap Chinese made karts. We fully expected problems like this. We ordered some new slightly better quality replacement bearings for about $15 each and fitted them ourselves with no experience. Many, many hours of driving later no one has had any bearing problems. 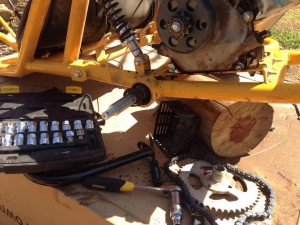 Because we’re in the middle of a Northern Territory dry season it gets extremely dusty. As a result we need to clean the air filters very regularly. Sometimes several times a day. This is done easily by undoing a couple of butterfly nuts and blowing the dust out with compressed air.

You do get what you pay for and we don’t expect of these karts to last forever. But we are well and truly getting our money’s worth out of them for now.