It was one of those days. The tides were wrong, the wind was up and bait was hard to get. It may be a primitive way of thinking, but in my mind the bigger the bait means the bigger the fish.

With the bait tank on the boat full of small herring our destination was The Crooked Creek, an offshoot of the McArthur River in South-Western Gulf country. We launched from the public boat ramp at King Ash Bay Fishing Club, which is about 40km downstream from Borroloola. 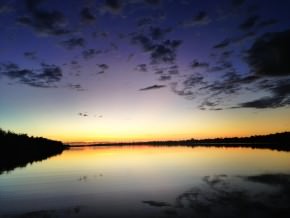 From King Ash Bay most locals head down towards the mouth for a day’s fishing. There are numerous forks in the McArthur River that lead to the Gulf of Carpentaria. This includes the Rutherford, the Chadwick, the Dugong and the Johnson. No one calls it the Johnson though. Everyone around here knows it as The Crooked Creek. Aptly named, The Crooked meanders backwards and forwards on itself like a snake track.

Once we reached the mouth of The Crooked Creek we had lots of options for fishing. Each option will usually depend on the tide. If the tide is an hour either side of high, I like to follow the channel out of the mouth and fish one of the holes. There are several of them and can be found with your sounder if you stay in the main channel. The deepest is about 8 meters. The channel is narrow in places and at low tide can be easily navigated because you can see the mud flats exposed either side of you. Once those mudflats go under water, it is very hard to find the channel without following a track in your sounder.

I would strongly recommend following someone out if you are a first timer and record the track in your sounder. The majority of people at King Ash Bay Fishing Club are friendly and are willing to show newcomers around. There are always the odd few who have their secret spots and will never share a thing. The best thing to do is go down to Groper’s Bar at King Ash Bay to have a beer and a chat with some locals. Chances are you will find someone willing to lead the way out for you.

Out the front of The Crooked I like to fish the drop offs on the edge of the holes. These spots never fail and are always productive for a mixed range of species. Most common are Jewies, Queenies, Blue Salmon, Fingermark & Grunter. We have caught almost everything in these holes. Earlier I said these spots “never fail”. Today, there was no movement in the tide and it was not meant to be. Not even a nibble. I don’t want to talk about it.

When there is a run-out tide, I poke back inside The Crooked Creek and head up one of the little offshoot creeks running off it. There are dozens of little creeks that are wide enough to take a boat up, and in most cases you can travel way, way up them. Sometimes several kilometres. This is where I target Barra. On the run-out tide I anchor upstream from a washout or gully that has water coming out of it (a few snags is a bonus) and throw my livie to the downstream corner as close to the bank as possible. Even if it’s only 8 inches deep. The theory is the Barra are waiting there for the baitfish, who are running out of water up in the washout to come down and into the creek.

Usually I have a lovely big, live mullet flapping around in there, but on this day it was a tiny little herring. I even had to put a smaller hook on. 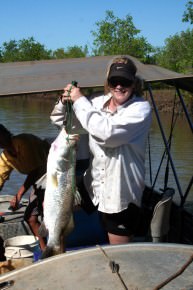 It wasn’t long before things started to heat up. Jazz was at the front of the boat and has a knack of catching nothing but Catfish. She got the first Barra hook-up.  Despite doing everything wrong including letting her line go slack, almost snapping her rod and having the drag set too loose, we somehow netted it. A nice 73cm Barramundi. Our arguing was interrupted by my rod screaming in the holder. Another nice Barra. Not as big as Jazz’s and boy did she let me know about it. 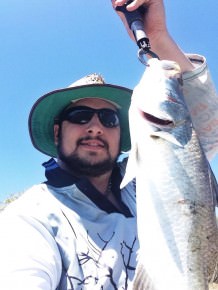 When things go quiet I like to keep moving to new spots. There are millions of spots to choose from. The McArthur River system is enormous. If it was possible to add up all the creeks running off each other, it would be in the hundreds or even thousands of kilometres. Coming off The Crooked Creek alone there are dozens of smaller creeks.

We tried several spots on the way back up The Crooked and picked up several more Barra, and dropped a few as well. The morning’s failures had been redeemed.

Although the tides had failed us in the holes out the front earlier in the day, they were perfect for Barramundi fishing up the creeks. The creeks provide shelter from the wind too. And the bait, well it was a pleasant surprise to have such a good day’s fishing with bait that I’d usually throw back.

The closest boat ramp is at King Ash Bay Fishing Club. To get to the end of The Crooked it will take you between 30 and 50 minutes depending on how fast your boat is. As you leave King Ash Bay you want to stay on the far side of the river, as there is a long rock bar that runs down the middle. You can see it at low tide. There are some floating channel markers, but they can’t always be trusted. The markers get moved around a bit when the river floods. 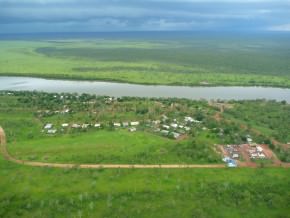 This is a great part of the world to explore and go fishing. Thousands of travellers and fishermen stay at King Ash Bay Fishing Club every year. Some come every year. The waterways are so expansive here, you can fish somewhere completely new every day.

Post Views: 4,147
http://www.naivenomads.com.au/wordpress/crooked-business-fishing-the-crooked-creek/http://www.naivenomads.com.au/wordpress/wp-content/uploads/2013/11/mikey-mcarthur-river-queensland-groper-king-ash-bay-900x536.jpghttp://www.naivenomads.com.au/wordpress/wp-content/uploads/2013/11/mikey-mcarthur-river-queensland-groper-king-ash-bay-140x140.jpg2016-02-01T02:09:32+00:00MikeyFishingOur King Ash Bay (NT) ExperienceState - NTTrip Blogs and StoriesIt was one of those days. The tides were wrong, the wind was up and bait was hard to get. It may be a primitive way of thinking, but in my mind the bigger the bait means the bigger the fish. With the bait tank on the boat full of...MikeyMichael Cunninghammichael@back9media.com.auAdministratorNaive Nomads