Carcoar Dam FreeCamp is a medium sized camp ground on the banks of the Carcoar Dam. The dam crosses the Belubula River upstream of Carcoar in the Central-West region of New South Wales, Australia. About 3 and a half hours from Sydney and 3 hours from Canberra. While we stayed at this stop, there were a few groups water skiing on the dam, plus other family groups using the grounds just for camping as it was during school holidays. 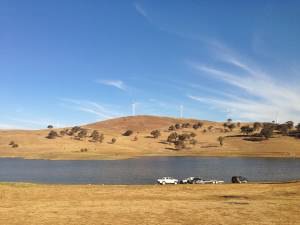 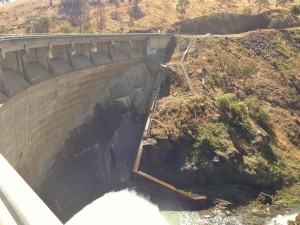 Carcoar Dam free camp is one of the more picturesque free camps we have stayed at. It is along the banks of the dam and over looks a wind farm on the adjacent hills. There are big shady trees, plenty of bird life enjoying the water, plus cattle in the adjoining farm paddocks. 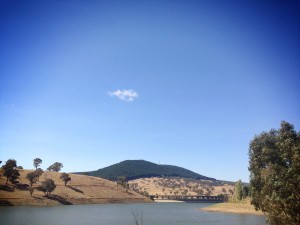 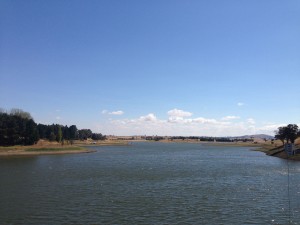 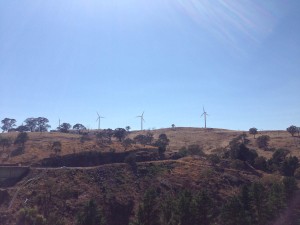 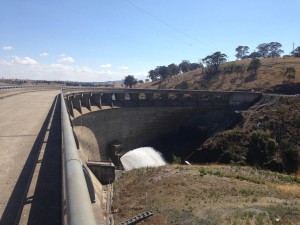 Carcoar Dam is dog friendly, with a few good walking tracks including one up to the dam wall. It was quite a sight to peer over the edge of the 50+ metre wall.

The facilities include flushing toilets and two cold showers each in both the male and female toilets. Although the male toilets had no shower curtains at the time we visited. Next to the amenities block there is a small tank labeled as “drinking water”, we didn’t require to use this water as we had filled up our drinking water jerry  can in Blayney while waiting for our washing at the Laundromat. (If you do head into Blayney while staying at Carcoar Dam, grab a Bolognese pie from the corner store next to the laundromat. They are tops and they don’t make bad coffee either). 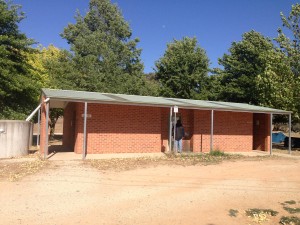 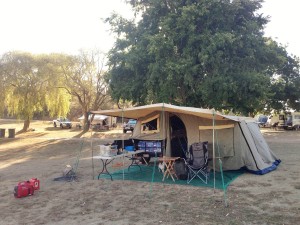 There are plenty of bins at the camp grounds, plus a large skip that we saw the council tending to. As mentioned above, Carcoar Dam is only about 15 mins from Blayney. Blayney is a small town but big enough to have an IGA, laundromat, bottleo, hardware store and bakery. While staying at Carcoar dam we did a bit of a day trip into Blayney for a “admin” day. It seems to be quite a friendly little town. Carcoar Dam is also about a 5 minute drive from the historic town of Carcoar. It’s worth going for a little drive to check this town out. It’s very quaint and has some lovely specialty shops.

We arrived at Carcoar Dam mid week and just a few days before Australia Day. The free camp was decently busy but there was still plenty of room, it just meant the prime spots had been taken. We ended up happy with the spot we found but we were on a bit of an angle as there isn’t a lot of flat ground at this free camp. Before arriving we had read online that the maximum stay is two weeks, however we did not see any signage at the free camp enforcing this. We actually met some grey nomads that had been there for two months as they were waiting on their generator to be repaired and were having some issues.

Even though it is a lovely spot, it can get quite windy, not surprisingly as it is across from a wind farm. The first afternoon we arrived we seemed to have arrived on a flukey afternoon as there was hardly any wind and we thought the place was just magical. The next afternoon, we weren’t so lucky, as the wind came up and turned our camper into a massive balloon. We had planned to stay a few more days but after a sleepless night with the high winds we packed up at first light. 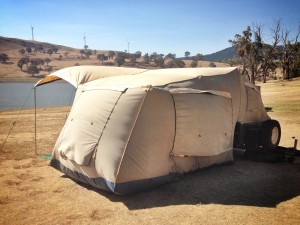 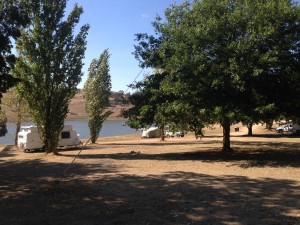 If you were travelling in a caravan or something more solid than a canvas camper, the wind may not bother you. Although we did note that fairly early on this windy afternoon everyone around us had retreated to inside their vans. Overall it is a very nice spot with amazing views and good FREE facilities. The dogs loved walking to the dam, we enjoyed watching the water skiing, but the wind got too much to stay any longer than two nights. 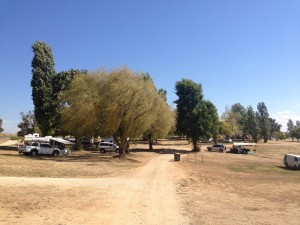 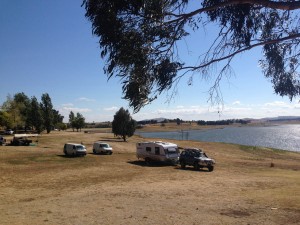 Post Views: 8,617
http://www.naivenomads.com.au/wordpress/carcoar-dam-free-camp-near-bathurst-nsw/http://www.naivenomads.com.au/wordpress/wp-content/uploads/2014/02/IMG_4266-900x675.jpghttp://www.naivenomads.com.au/wordpress/wp-content/uploads/2014/02/IMG_4266-140x140.jpg2016-10-24T09:33:27+00:00JazzAustralian Camping DestinationsDog Friendly CampingFree Camping DestinationsState - NSW and ACTCarcoar Dam FreeCamp is a medium sized camp ground on the banks of the Carcoar Dam. The dam crosses the Belubula River upstream of Carcoar in the Central-West region of New South Wales, Australia. About 3 and a half hours from Sydney and 3 hours from Canberra. While we...JazzJasmin Cunninghamjazz@back9media.com.auAuthorNaive Nomads