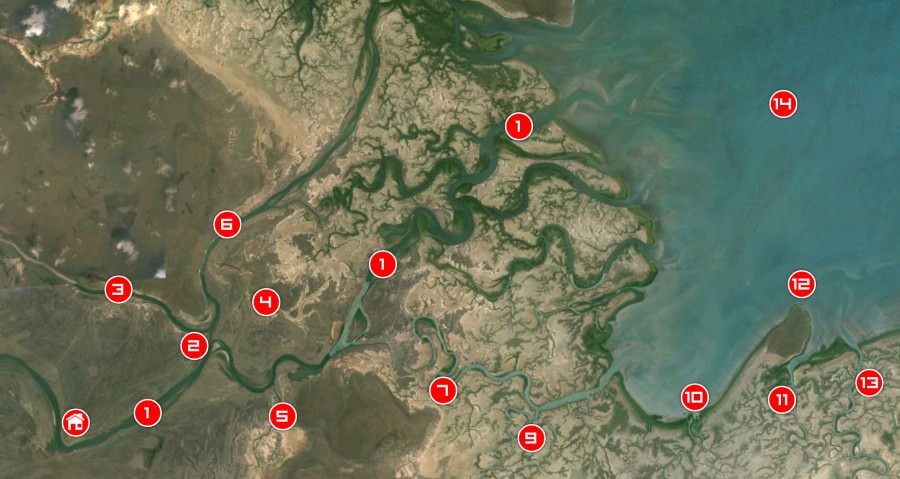 King Ash Bay Fishing Club is where to launch your boat if you want to fish the McArthur River System. There is a two lane boat ramp with ample parking, a petrol station, cabins, camping, houseboat hire, licenced bar, and meals are available from Groper’s Grill 7 nights a week from March until November.

As you can see by the map, the McArthur River only makes up a fraction of the whole system. There are literally thousands of small creeks shooting off from the main river that you can explore and go fishing in. Sometimes even the smallest creek seems to go on forever while traveling up it.

It is possible to catch good fish anywhere on the McArthur River, but most people head towards the mouth, which is about 30 – 40 minutes away depending on the speed of your boat.

Some people choose to camp at Batten Point. There are no facilities available. No toilets, no water, no nothing. But some people like that kind of thing when camping. Especially if you are setup for it.

I have never seen it with my own eyes, but apparently people hand-feed Giant Queensland Groper’s from the bank at Batten Point.

Heading upstream along Batten Creek, it looks quite similar to many of the other large creeks in the system. You will be stopped however by a large rock-bar protruding out of the water. I have seen a couple in a very small boat get out and push over some of the very shallow rocks to get to the other side. I wouldn’t recommend this though, because I have seen Salt Water Crocodiles there many times.

Species you are most likely to catch are Barramundi and Queenfish (Queenies).

This is Aboriginal owned land. There is a small outstation located on the island, and access to the island is restricted without the permission of the Traditional Owners.

The Poison Creek is a very long creek in the system. In fact, if you drove to King Ash Bay via the Savannah Way from the East, you would have crossed the Poison Creek not long before you reach Borroloola.

Poison Creek is a popular spot for people to go fishing that don’t want to venture too far away from the boat ramp. Your target species fishing the Poison would be Barramundi. It can be very productive if the water of the McArthur River is dirty as a result of rain upstream. The fresh water flowing down from the Poison is from a different catchment area and can be a lot cleaner sometimes.

Caution must be taken as there are a couple of submerged rock bars. Many anglers have limped home from the Poison with bent propellers.

The Carrington also opens up at it’s mouth into the Gulf of Carpentaria, just like the McArthur River does.

If you are a first-timer and you want to fish the Carrington, I would recommend you follow someone else out and make a track in your GPS/Sounder. The Carrington is not as straight forward as the McArthur River.

Once you are down towards the mouth of the Carrington Channel you have access to loads of great fishing areas including the Davies Channel and areas called The Sticks and The Kellys (Just to name a few).

Just make sure you stay on the channels. Dozens of people a year get stuck on the mudflats after straying just slightly off the channel. If you get stuck on a run-out tide, forget about it. You will have to wait until the tide comes back in many hours later before you can head home.

Just like all the other creeks in the McArthur River system, the Crooked Creek has heaps of smaller creeks shooting off it that you can travel for miles up and go fishing. I like going up the smaller creeks on windy days. You can always find a calm spot out of the wind.

The Crooked Creek is actually marked on some maps as The Johnson. But don’t call it that when you are at King Ash Bay, because most people won’t know what you are talking about.

To give you an idea of the size, you could spend 3 days fishing just one arm of the Fletcher and still keep finding new good fishing spots.

Inside the mouth of the Fletcher where it splits into two, there is a big, deep hole. Over 10 metres deep, which is very deep for the McArthur River System. Fishing deep holes anywhere in the system can be hit and miss. Sometimes you might not even get a bite. Other times you might get onto a school of Fingermark or Jewies etc.

I love fishing The Twins. But there are things to consider before you go. Firstly it will take you an hour to get there, and an hour home. In a small roof-top-tinny maybe even longer.

You will also be crossing some exposed water in the Gulf of Carpentaria to get over there. There shouldn’t be any big sea swells, but it can get quite choppy.

And the biggest factor on if you are going to fish the Twins or not is the tides. On a low tide, the mouth is land locked. The mud flats are exposed and there is no way in or out for anyone in any size boat.

A lot of the time you can be fishing in the Twins for the day and no see another boat all day.

Fishing in the Twins I target mostly Barramundi and sometimes Black Jew.

I’ve only fished the Sharker Creek twice before, and both times caught some great fish. It was up a sneaky creek in the Sharker that me and another bloke caught over 20 Barramundi in just one snag in about 40 minutes.

Sharker point is a rocky point. I have never done well fishing there myself but I know a few people that love to fish there and catch some great fish.

I was lucky enough to take a houseboat up The Lousey Creek earlier this year for two nights. It was some great fishing. I found a spot there where I caught lots of flathead. The reason I mention this is flathead are not that common here. You can go fishing for six months in the McArthur River without catching a Flathead.

At the King Ash Bay Easter Fishing Classic held each year, flathead is one of the seven target species. If you want to catch a flathead, you are going to have to fish the Lousey and find my secret spot.

Just ouside the McArthur River System, you will find the Sir Edward Pellew Group of Islands. This includes North Island, West Island, Vanderlin Island and heaps of others, both big and small. The Pellew Islands are located in the Gulf of Carpentaria.
With a bigger, fast boat a lot of people fish around the islands as a day trip. It’s a big day but it is doable. There are places you can camp out there, but most of the Islands are Aboriginal owned.

Around the islands you can troll for Spanish Mackerel, Tuna and other pelagic species. There are also an unlimited number of rocks and reefs to fish around to catch things like Coral Trout, Tuskfish, Nannygai and Red Emperor.