Last year, Jazz and I spent the 9 month dry season at King Ash Bay running the kitchen, called Groper’s Grill. This year in 2014 we are doing it all again. Last year was a lot of hard work, but we learnt so much that it seemed like a shame not to come back. 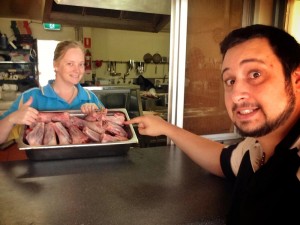 Arriving back at the start of the year was great. It was February, so it was still the wet season. Everything was beautiful and green and there was no dust on the roads. At that time of year, King Ash Bay has only about 40 or so people around. It’s just the full time residents as well a hand full of die-hard travellers who still travel despite the difficulties of travelling during the wet.

The servo only opens for 1 hour a day during the wet. And the bar opens just twice a week. You can go a whole day without seeing anyone sometimes. As a result, the bar is quite popular on the days it’s open simply to catch up with people. The conversation is usually about the weather at this time of year, with cyclones, rain and river water levels being the main topics of discussion.

It’s a superb time of year to go fishing. With the warmer water temps, the Barra are out in enormous numbers. If you can deal with the painfully hot and humid weather and you want to catch. Barramundi, then you should definitely come to King Ash Bay Fishing Club in the warmer months. Although you will need a good four-wheel-drive, because the last 21km of your trip will be on a dirt road. And this dirt road will more than likely be covered in mud and water, in some places over your bonet.

The road is only “really bad” like that for a couple of weeks at a time. The conditions improve quickly between downpours.

Jazz and I went out fishing a few times in February and March. We made the most of enjoying the last of our time off. As soon as the season kicks off, we work 7 days a week in the kitchen. The McArthur River was in complete flood, so we had great fun launching and retrieving boats from the car park ABOVE the boat ramp. 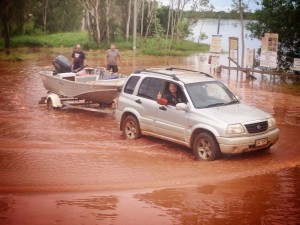 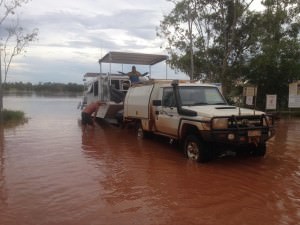 But the wet season has to end. Slowly but surely the caravans start rolling in. We start getting busy by late March/Early April.

In April, we had the King Ash Bay Easter Fishing Classic. It was a huge weekend. Last year it got rained out and postponed, but this year the weather held out just long enough. Unfortunately Jazz and I don’t get to go in the comp, because we are so busy working at that time of year. The Sunday night is the final weigh-in and presentations. We had a special menu prepared of meals that were easy to dish up on the spot, because we knew we were going to be busy. We served over 300 meals in two hours! That’s just insanely busy. We had never done that many meals in a night before, but we handled it ok. Only a couple of minor dummy-spits by me.

Cracker night last year was awesome fun, and this year was no different. The club puts on a great free fireworks display and a big bonfire. It’s on the 1st of July each year, which is Territory Day. It’s the only day of the year you can legally buy fireworks. For city kids like us, it’s awesome because we didn’t grow up with fireworks. 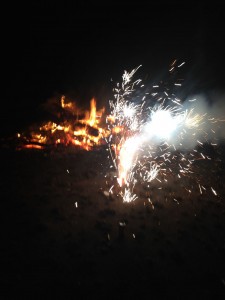 This season we have had quite a few entertainers come through. Singers, performers, musicians and bands. These nights usually draw quite a crowd up at the bar, and finish with a few sore heads in the morning.

July/August is the busiest time of year at King Ash Bay. This is for several reasons. Firstly the weather is beautiful. During the day it is 28 degrees with low humidity. Travellers come up from down South where it is freezing this time of year. Also at this time of year, it will be dry. It WILL NOT RAIN. That I can guarantee you.

This year I probably get one person a week come up to me and say “are you the guy that writes the blog?” So it’s good to see that I’m not just writing to myself here!

One bloke said to me that I should mention the dust in my blog. Yes, King Ash Bay has dirt roads. Yes it gets very dusty here when it hasn’t rained in 6 months.

Well that’s King Ash Bay in 2014 Part 1. We are looking forward to the second half the season, and we hope to see you if you are travelling this way.