Yes, you can catch fish off the bank at King Ash Bay. Would I recommend it? No. Although I have heard of many good fish being caught from the bank here, in my personal experience it’s not all that effective. I’ve only ever caught catfish and sharks from the bank. Some people that camp on the river bank down in the non-powered area of King Ash Bay (called Gennie Flats). My old man caught a 90cm Barra from the bank when he used to camp down there. But I think that is pretty rare.

There is of course the ever lurking danger of crocodiles too. You will hear people tell you about ways to be “safe” from crocs while fishing from the bank, but in reality these animals are very strong and very fast. If it wants to attack you, you will not see it coming.

If you are coming to King Ash Bay for fishing, you really need to either bring a boat, hire a houseboat here, or go out on a fishing charter with one of the licensed charter operators. My oldies live here at King Ash Bay and they own a small houseboat. Jazz and I were lucky enough to go out in it for a couple of nights earlier in the year. Read about our King Ash Bay Houseboat Adventure here.

When I was bored one afternoon last year I threw in a line off the bank. I was just catching catfish. But then this happened! 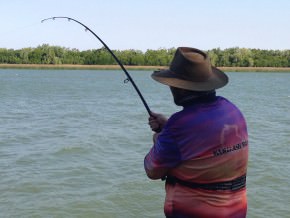 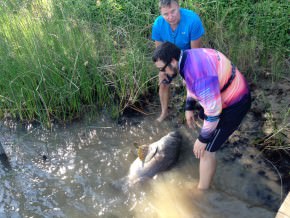 Read about when I caught this Giant Groper.

In the River and Creeks 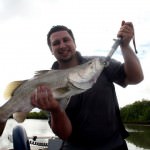 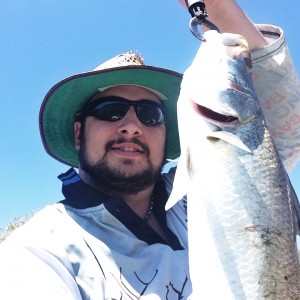 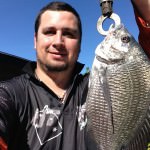 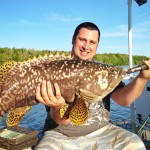 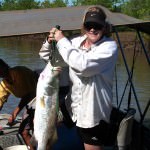 The McArthur River System is enormous with hundreds of mangrove lined creeks coming off it. Most people head towards the mouth, but you can catch fish anywhere. The biggest problem is choosing where to fish on any given day because there are so many good spots. Some people that come too King Ash Bay year after year troll and nothing else. The go up and down their favourite stretch of water trolling lures and are quite successful. But I don’t see the fun in that. I like to go exploring way up the sneaky creeks, finding snags and structure to fish at. I do this with both bait and flicking lures.

In the creeks you are usually going out to target Barramundi. But while fishing for Barramundi you will also catch Fingermark, Grunter and Mangrove Jack. All of these are very desirable fish to catch, and many people here would rather take home one of these fish for dinner rather than Barra. On any given day up a creek, you should catch heaps of Cod, and maybe some Queenies and Blue Salmon. If you are fishing with bait and catch more than 2 catfish in one spot, move on. You are gonig to keep catching these pests. Sometimes it’s good fun to just flick lures, because it would be very rare to get a Cattie on a lure.

In the McArthur River System there are also some deep holes. You can catch big Jewfish in these holes, particularly at night. But you don’t need deep water to catch a big Barra. When flicking lures from the boat, you are usually trying to land the lure as close to the bank as possible. I actually wrote an article on Barramundi Fishing at King Ash Bay  a couple of weeks ago.

Depending on the size of your boat and motor, it takes most people around 40 minutes to get to the Gulf. There are several ways you can get there. You can simply follow the McArthur River all the way, or you can turn off along the way and take one of the offshoots to get there. There’s the Davies, the Kelly’s, the Crooked Creek, the Chadwick, the Rutherford, the Dugong and many more. As you can see, there are a lot of options. If you have never been here before, then come up to the bar for a beer and a feed and talk to some locals. Most people are more than happy for you to follow them out so you can plot a track in your gps tracker on your boat. Although they might not take you all the way to their favourite spot.

Out at the islands 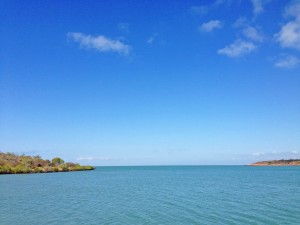 In a bigger boat, you can travel outside of the River and Creeks and find yourself in the Sir Edward Pellew group of islands in the Gulf Of Carpentaria. Out there you can go reef fishing and catch yourself a beautiful Coral Trout. The fingermark grow bigger out at the reefs than in the creeks as well. Hook yourself a Giant Trevalley (GT) a Spanish Mackerel or even a Tuna.

It’s a big day of travel if you want to go out and back in one day. Depending on which island you go to, it can take 2 hours each way. But it is worth doing at least once while you are staying at King Ash Bay. It’s beautiful out there. It’s almost like the Whitsundays of the Northern Territory. Although between the Crocodiles, the Sharks and the Jellyfish, I wouldn’t recommend swimming there.

Some people stay and camp at Paradice Bay at the top of North Island. Most of the Pellew Islands are traditionally owned by Aboriginals and you need permission to step foot on them. But Paradice Bay can be enjoyed by anyone. There is even a toilet there. Some people spend weeks at a time out there, only coming back in the King Ash Bay for fuel, food and other supplies. 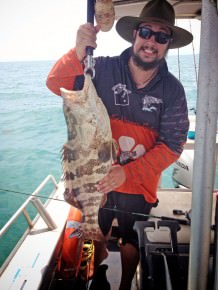 Most of the serious fishing groups that come here go out to the islands for fishing. 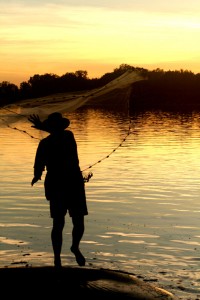 If you prefer to fish with bait, then you have 2 options:

– Cast Net – By far the most popular way of getting bait here. It’s free and live bait will usually fish better than frozen bait. The use of cast nets are legal in the Northern Territory. The most common form of of live bait used is mullet, but you will catch almost anything in your cast net including Herring, Prawns, Whiting and even Barramundi!

Any questions? Fire away in the comments section below…

Post Views: 5,368
http://www.naivenomads.com.au/wordpress/fishing-at-king-ash-bay/2015-05-09T03:06:34+00:00MikeyFishingOur King Ash Bay (NT) ExperienceOff The Bank Yes, you can catch fish off the bank at King Ash Bay. Would I recommend it? No. Although I have heard of many good fish being caught from the bank here, in my personal experience it's not all that effective. I've only ever caught catfish and sharks...MikeyMichael Cunninghammichael@back9media.com.auAdministratorNaive Nomads