The owner and operator of NT Coastal Fishing Charters is a top bloke named Ash. He is only young, but don’t let that fool you. He has fished the waterways around Borroloola, King Ash Bay, the McArthur River and the Gulf his whole life. In February 2014 I went out on a days fishing with NT Coastal Fishing Charters. Ash has two boats, one that is a bit smaller that is suitable for fishing the creeks and rivers, and also a big one called “Five O’Clock Somewhere” that he fishes around the Pellew Islands in the Gulf of Carpentaria.

Today was a big-boat day. 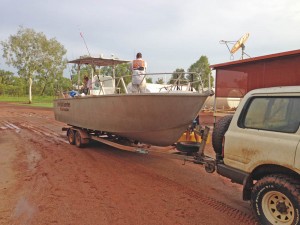 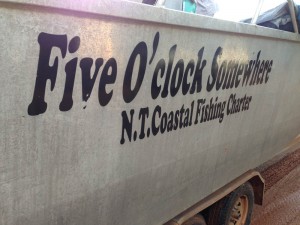 We left nice and early in the morning from the King Ash Bay Fishing Club boat ramp. It’s a big, fast boat with two engines on the back. The river was in flood too, so the trip downstream was even faster than usual. We popped out of the rivers and into the Gulf. Our first stop was over near West Island, and Ash landed the boat straight on top of some fish. Jojo (from the King Ash Bay Servo) was on board and landed the best fish at this spot. A 1 metre Black Jew. 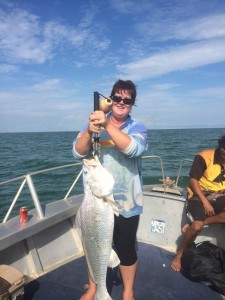 After catching some more fish here, we moved on to a spot where we pulled up on a beach and Ash cooked up a BBQ lunch for us. The rest of flicked lures while Ash did the cooking and cleaning. Off the beach we caught some small Queenies and a Parrotfish (It might have been a Tuskfish, I’m not sure).

Being the wet season still, we could see storms around us on the horizon all day. Small cells of rain would keep moving past us. Unfortunately one cell decided to come straight over the top of us, so we found a small island to take shelter behind until it passed. The boat was fully capable of travelling though the storm, but our Captain Ash was reluctant. He explained the reason for this was he had ALMOST been struck by lightning before while travelling through a storm. The bolt hit the water straight in front of the boat. He said the air went hot around him, and the noise was deafening. He now understandably doesn’t like to travel through storms. It was all good though. We had some fun while we were anchored getting busted off by massive sharks.

The storms move so quickly. Only 20 minutes later and we were on our way to the next spot. This was the best spot for fishing of the day. Everyone on the boat (except one poor bugger) landed several big Black Jews. We very quickly caught enough to take home, so we started throwing them back. It wasn’t in overly deep water, so the fish were released unharmed. (If you pull a fish out of deep water, it’s chances of surviving upon release is not good). 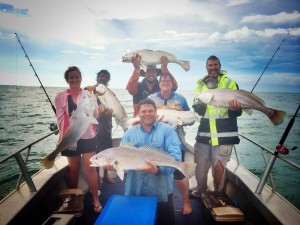 The trip home was a little slower, battling the raging flood waters. But it was still exciting seeing the river in flood. Most people would never see it like this.

All I can do is highly recommend NT Coastal Fishing Charters to anyone travelling to the King Ash Bay or Borroloola region. Ash knows the waterways, the good fishing spots and has all the good gear. He’ll even put the bloody bait on the hook for you if you like.