Living at King Ash Bay, we have heard many people talk about “heading out to the islands”. They are right on our doorstep yet we haven’t had the chance to go out there and see them for ourselves… until now.

There are two types of fishermen that come to King Ash Bay. There are the ones that tow a caravan and have a roof top tinny. They fish the rivers and creeks. Then there are the ones that tow a big boat and rough it in a swag or tent. They go out to the islands. The islands I’m talking about are the Sir Edward Pellew group of Islands, located out from the mouth of the McArthur River in the Gulf or Carpentaria.

There are dozens of islands and islets, but the five main islands are West Island, North Island, South West Island, Centre Island and Vanderlin Island to the East.

South West Island is accessible to people in small boats on a calm day, but the further you travel the better the fishing spots get. In a bigger boat, you can access hundreds of reefs and bomboras in the Sir Edward Pellew Islands. They hold all types of fish from Coral Trout to Bream to Sharks (all of which we caught on our trip out there). Pelagic fish can be found out there too like Tuna and Spanish Mackerel. Even Marlin and Sailfish are caught from time-to-time.

Even though we did do some fishing on our day out to the islands, it was more of a tourist trip to have a look around.

Our friends invited us onto their boat for a day (and a night) out at the islands. This was an opportunity we couldn’t say no to. They know the Pellew Islands well.

Leaving early in the morning, travelling down the McArthur River in their ex-working barge was fantastic. The water was smooth and still, and the barge is big enough to move around comfortably while travelling. To get to the mouth of the McArthur River takes 40 minutes to and hour I suppose, but time flies when there is so much to look at around you. At the mouth of the river, you are now in the Gulf Of Carpentaria and you can see some of the Pellew Islands in the distance. From this point on you have to cross open water to get to any of the islands and fishing spots. I certainly wouldn’t be going out there in a small boat. The weather can change from perfect to cyclone very quickly out here.

It’s out in the islands where the water is much clearer, unlike the muddy rivers and creeks. While amongst the islands it would be unusual not to see Dugong and Turtles in the water. We saw both.

Most of the land of the islands is traditionally owned by Aboriginals. The Yanyuwa people. There is nothing extravagant, usually just a tin shack next to the beach. And most aren’t inhabited all year round. Because it’s owned land, in most places on the islands you can’t get out of your boat without permission from the traditional owners. Lucky for us, we did have permission in a couple of spots.

Most of our day was spent in the boat, travelling from spot to spot to have a look and a bit of a fish. The Pellew Islands are rocky, and have sandy beaches. I have spent time travelling in the Whitsunday’s in a boat, and it is quite similar to that. It’s a shame you can’t really swim here. The threat level of big sharks and monster crocs is just too great. There are so many reefs and good looking spots to go fishing. It’s a massive contrast from the flat, mangrove covered flood plains of the McArthur River Delta nearby. 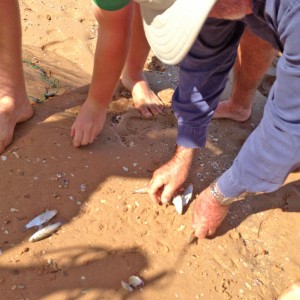 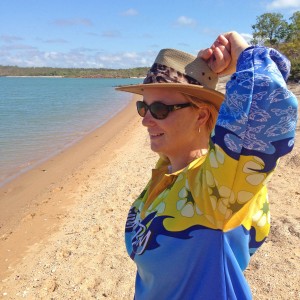 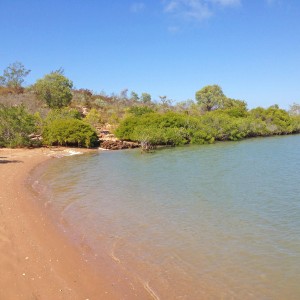 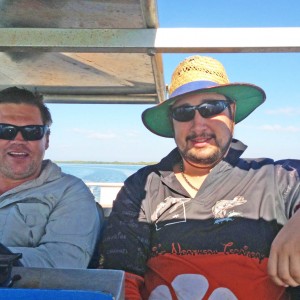 We had permission to camp on the beach at the North end of Vanderlin Island, which is the biggest Island in the group. This is one special place. From white sandy beaches, to coral covered outcrops, forests of pandanus trees, lagoons, creeks and sand dunes. This is by far the most remote place I have ever been to. I mean, King Ash Bay is remote, but this is 2 and a half hours by boat away from here!

After a late night around the fire on the beach, we headed home bright and early over the beautifully calm morning ocean. If we get a chance to go out there again, we would go out for several days to explore some more and have a good fish.