Barramundi: One for you, and one for me.

On our first trip to King Ash Bay, NT to visit my parents we managed to get out in the boat fishing 3 times. On the first morning just as dawn was breaking, we head down to the boat ramp. Of course the night before we had hooked up the tinny to the old mans Land Cruiser and packed it with all the fishing gear. All that was needed was to grab some cold water and a hot thermous of coffee. Silluetted in the predawn light was Shelly, patiently wating at the boat ramp. Shelly is another local of King Ash Bay and good friends with my parents. The plan being that Jazz goes out with Shelly in her tinny, or “the girls boat” and my old man Normie and I go out in “the boys boat.”

We entered the water with no dramas and headed towards the mouth of the McArthur river. First passing the riverfront “shacks” of King Ash Bay to our left, then crossing the Carrington river as it disects the McArthur. With a 40HP 4 stroke on the back, it takes a good 40 minutes to reach the good fishing spots. About 20 minutes in we stopped at a small creek that has a big old pipe at the end of it. They call this one Pipe Creek. As you can tell the locals are very creative. This was our spot for castnetting for some bait. With only a few casts by our professional castnetters Shelly and Normie we had more than enough bait to last the day, mostly mullet.
We jumped back in the boat, pushed off and we were back on our way to Normie’s secret spot. The plan of attack was to anchor up and throw out a live or strip bait each, then with another rod, flick some lures. The first hour was quiet. Normie picked up a couple of nice cod on lures while I had no action on the lures. My live mullets kept coming up dead with no scales. It turns out that some of the fussy Barramundi brush up againt the mullet to scale them before they take them whole. 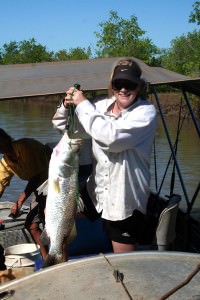 The girls were anchored up around the corner and we were in contact via hand held two way radios. Even though we had a fair amount of banter going back and forth, from boat to boat there was nothing really to brag about yet. A couple of silent minutes pass then we hear some yelling and cheering from the girls around the corner. Skeptical, we up anchor and head around the corner to see what all the fuss is about. As we approach the girls boat Shelly yells out “Jazzy caught a catfish.” Jazz waits a few seconds then from the bow of the boat, lifts with 2 hands an 83cm Barra. It was her first Barramundi ever and I was completely jelous to say the least.
A couple of days later Normie and I head out by ourselves to the same area. We anchor in the mouth of a creek that opens out into the Gulf or Carpentaria and drop some live baits straight off the side into some deeper water than usual. Our baits barely had time to hit the bottom when before we knew it we were pulling up fish after fish. We couldn’t bait the hooks fast enough. We were onto a school of Fingermark and they were a good size.  It was great fun, but still not my first Barra.

It is the morning of the day before we leave for home. yet again it is the crack of dawn, and this time the girls are coming out again. This was my last chance for a Barrmundi, I needed a miracle.

We were anchored up another sneaky creek and had our baits cast in to a promising looking snag near the bank. I had turned to pour myself a coffee. When I looked up I saw my line had moved to the middle of the channel. I remember thinking to myself “hmm, that’s not right.” I pointed out to Normie that my line had moved and he told me I had a fish on. At first I didn’t believe him, the drag was not screaming, the rod was not bending. I picked up the rod and gave it a bit of a tug, then all hell broke loose. The fish had decided that he was very unimpressed that I had hooked him and attempted to retreated into the snag. I lifted the tip of the rod and steared the powerfull fish back towards the center of the channel, and thats when the acrobatics started. He completely breached out of the water and shook his head around. There was no doubt what sort of fish it was, this was my Barra! With excellent skill and poise, Normie lowers the net into the water and brings him into the boat. I’m pretty sure that I had never given my dad a “high-five” in my life until this point. It was certainly an exciting moment and by far the biggest fish I had ever caught at 78cm. 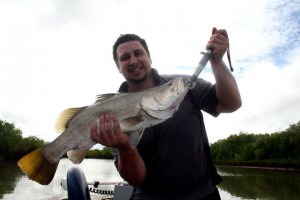 I had thought of all different ways I could surprise my mum when we got back to King Ash Bay with my first Barramundi, but I had no chance. She took one look at me and the smile on my face and knew I had landed a Barra.

The bigger the Barramundi, the higher the chance the fish will be a breeding female and the best thing to do is release them. Some say
the bigger ones don’t taste as good anyway. At 73cm  the fish I caught was a perfect size to keep, so we did and ate some of it that night lightly coated with flower, salt and pepper on the BBQ.