I’m not fit. Sometimes I’m lazy. My cousin Mitchell on the other hand is neither of these things. This time last year he ran his first half marathon. Since then he has ran several full marathons and most recently set out on a 100km race through The Glasshouse Mountains. Jazz and I tagged along as support crew. 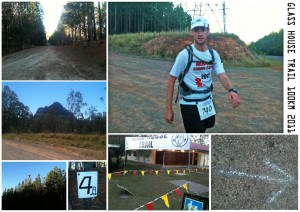 It was mid afternoon on Friday when we arrived at Glasshouse Mountains Caravan Park on Old Gympie Road. We had plenty of time to setup camp. Just as we finished it started raining, so it wasn’t the best start to the trip. We had some awesome T-Bones for dinner which brightened our spirits.

The next morning, still dark at 5am Mitchell loads his gear into the car and we take him to the start/finish line in Beerburrum. The competitors head off on their epic journey so Jazz and I decide to go back to camp and back to bed. I wake up at about 9:30am and realise Mitchell has been running for four hours already while I was sleeping. We were expecting him to finish the race in another 9 hours time, so we had plenty of time to explore the surrounding area.

First stop was the Glasshouse Mountains Lookout (Glass House-Woodford Road). From here you can see a lot of the Glasshouse Mountains. Mitchell (who also happens to be a Geologist!!) had previously explained that these mountains were formed as ancient volcanoes. Over thousands of years, the surrounding dirt and stone has been washed away, leaving behind huge pylons of rock at the peak of each mountain. These rock peaks are made from the lava that had cooled and hardened in the volcanoes. What was once (maybe 100 thousand years ago or more) a volatile area of the world, is now full of natural beauty. 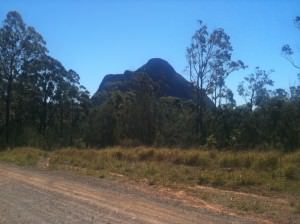 From the lookout you can also see the thousands of acres of pine forrest plantations in the area. The dirt roads and fire trails that cut through the forests seem to be very popular with dirt bike owners and four wheel drives. We past hundreds of them in our travels during the day. Most of them covered in dirt or mud from their days shenanigans.

Our next stop was Woodford. It seems like a nice enough country town. No different to most other towns of it’s size. One stop we did make in Woodford was the Leopard tank parked on the side of the road on the edge of town. It was an impressive site and a great experience to be able to get up close to this ex military vehicle. You have to wonder what stories this machine would be able to tell. 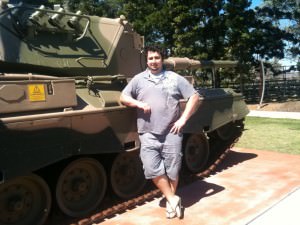 At 5:30pm we head back to the start/finish line of the 100km race. Mitchell comes cruising in across the finish line an hour ahead of schedule, and not even out of breath (although tired, hungry, smelly and sore). We head back to camp and cook up a great feast and enjoy a couple of beers.

In summary, I probably wouldn’t go back to this area. There isn’t a whole lot to see or do. The locals clearly enjoy themselves off the bitumen but I wouldn’t go traveling large distances to get here. The scenery and views of the mountains are quite nice, but there is only so much time you can spend looking at mountains in one day.