Giant Groper From The Bank

After having a couple of beers and playing some darts, I decided to pack an esky, grab a rod and go sit down near the river. It was about 5pm and the sun was low in the sky, shining brightly over the McArthur River.

All I had for bait was some smelly old frozen squid. This was the wrong bait to be using for so many reasons. All I could possibly expect to catch was catfish. And that’s exactly what happened. My first bait resulted in a small catfish.

My second bait that I threw out resulted in … Another catfish! When I had wound this catfish in close to the bank, I left it in the water, just to have a look at it. It was flapping and dancing around.

Not 5 seconds later all hell broke loose! There was a splash, and a brief glimpse of the attackers tail. It had smashed the catfish and was charging away with it at a million miles an hour. The bend on the fishing rod was huge. And although my drag was set incredibly tight, the fish was pulling football fields of line off with ease. 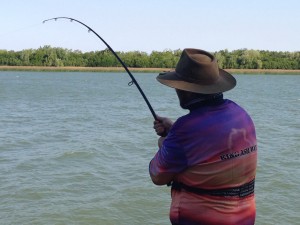 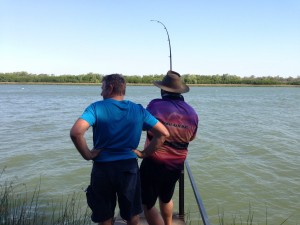 Now I can tell you upfront that this story does have a happy ending for all involved (including the fish!). But I had a lot of luck go my way. Let me explain.

1.) The fish stopped and turned. If he wanted to keep swimming down the river, there is nothing I could have done to stop him. He was just too big and strong. So the fact that he turned, meant that I was able to drag him back towards me, ever so slowly.

2.) I was using a rod that had nylon mono line. There were two times that the fish went into the reeds on the river bank further down the river. I dragged him out of the reeds using brute force. If I had been using braided line, it would have snapped on the reeds, or a stick etc.

3.) When the fish got closer, it swam around a round metal pole, then started running again in another direction. It was taking line off. I was certain the line would break. But it didn’t.

4.) The last piece of luck was the fact that after landing the fish, the hook just fell out! We discovered that it had snapped the end off the hook and was just barely holding on to it’s lip. 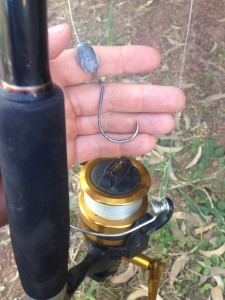 As always, a photo never does the real thing justice. Remember that I am 6 foot 4 and 140kg posing next to this fish. Our estimated size was about 1.5m long and well over 30kg. With it’s mouth wide open, you could have fit a standard size microwave in there. No joke! 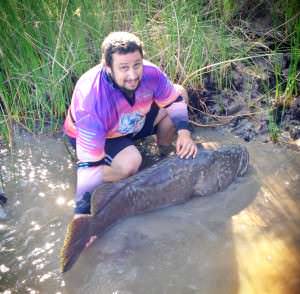 After a couple of very quick photos, we turned the Giant Groper around. We didn’t need to help it any more than that, as it kicked a couple of times, then swam off happily. 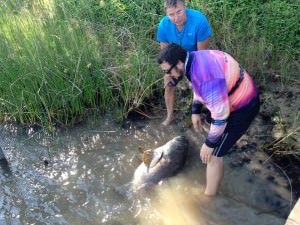 My old man, who was there at the time reckons that this fish was probably a hundred years old. And has been caught and released at least as many times. Imagine the stories he could tell.

The McArthur River, and particularly the water in front of King Ash Bay is a healthy ecosystem where these Giant Groper’s thrive. Many campers report seeing several at a time.

One last thing… The drag was set on the reel so tight that afterwards, I tried to pull some line off the spool with all my strength, but couldn’t. The fish on the other hand was taking line off with ease. Such a powerful fish.