After working 49 nights in a row in the kitchen, my parents (who live at King Ash Bay) offered to give us a night off and run the kitchen for us. They own a small houseboat, and they let us take it out for the night.

It was wonderful to break the grind of spending so much time in the kitchen every day.

The waterways here are amazing. You obviously cant swim because of the crocs, sharks, jellyfish, giant gropers and anything else that might want to kill you here. But being on the water is just awesome. There are literally thousands of little creeks to explore off the main rivers, plus the Sir Edward Pellew group of islands just inside the gulf which have pristine beaches and some amazing reefs for fishing.

On our one night off we didn’t travel far. We just went up the river a bit and anchored up inside a creek called “The Anna Branch” just off the McArthur River. I fished almost all night and caught a heap of fish. Jazz and I don’t really eat much seafood so I threw everything I caught back.

The highlight was definitely the Groper I caught early in the morning. It was pre 5am and Jazz was still asleep. I was awake fishing from the night before. At first I thought I was snagged. When I pulled on the line a bit more I obviously pissed him off because he sped off down the river. My drag was set so tight I could not pull off line by hand, but this groper was pulling line off easily. After 5 minutes of battle he decided to try swimming up a little gutter off the main creek. I dragged him out of there, then he went under the boat. Because of the angle, the rod (my old mans $1,000 rod) must have come perilously close to snapping, but luckily he came out of there and headed towards a snag near the bank. It was just a tiny mangrove that had fallen into the river, but if the line is taught and touches a little branch the braided line will just go “tink” and snap. Luckily I dragged him away from the snag and I started to bang on the houseboat door to get Jazz up.

Jazz was sound asleep, but surprisingly was outside holding the landing net for me within about 10 seconds. Although she was stumbling around a bit.

We successfully landed him and I got a heap of photos plus a little video of releasing him back into the water. He swam away unharmed. 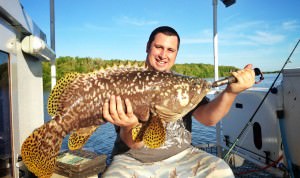 The photo doesn’t do it justice, probably because of my fat hands make it look small. But this thing weighed as much as a bag of cement. I could have stuck my head inside its mouth it was so big.

Definitely the biggest fish I have ever caught.

It was a great little trip that we wont forget and we cant wait to get back out there on the water again.