When driving any country roads in Australia, you will always see little dirt tracks going off into the distance. Whenever people drive past, they wonder “I wonder where that goes?” Well Jazz and I have started a little bit of exploring by actually going down these tracks to see where they lead. We have found several places so far right near King Ash Bay.

Minngarda Waterhole was one of the first places we found. As you exit King Ash Bay Fishing Club there are several old cattle grids along the 21km road. If you turn right down a small track at the second grid, it takes you to the waterhole. But yesterday we went out to the third grid and turned right.

This track led us to the rock bar on Batten Creek.

The track itself is only a few kilometres long, and at this time of year (dry season) you could ALMOST get in there in a two-wheel-drive sedan. The road is just a little bit bumpy with two or three little washouts. If you had a Landcruiser, you wouldn’t even slow down. The track is well worn, so there is no real chance of getting lost. During the wet season, I would assume you would need a monster truck to get in. There are dried up mud flats and creek beds the whole way.

Now onto the rock bar. When we arrived there, I got out of the car and was met with a small cliff several meters high. Standing on the edge of the cliff looks out over Batten Creek and the rock bar we had come to find. It’s a very peaceful and picturesque location with green reeds swaying in the breeze.

The first thing we noticed was a medium sized croc slowly swimming away. A perfect indication that nowhere is save to swim here! Once the croc had moved on Jazz kept pointing out big fish she could see in the water. I could not see any. She let me use her polarised sunglasses, then BAM! Suddenly I could see underwater perfectly. It was a huge school of Queenfish (or Queenies) each probably a meter long. There would have been at least 20 of them. They were just cruising along very slowly. It would have been great fun to flick a lure into them, but unfortunately we didn’t bring any rods. We had not expected this to turn into a fishing trip. 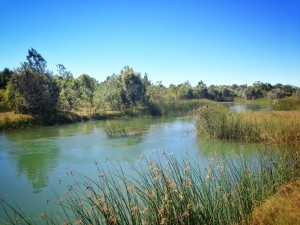 We got back into the car and travelled probably another 60 – 100 meters further up stream. From here we were at the other end of the rock bar looking back at it. From this spot there was no cliff, so we were able to walk right down to the waters edge. This spot was just beautiful. Jazz and I said that we have to come back to this spot with a few beers and a fishing rod one time. As long as we don’t run into any crocs, it would be a Magnificat place to spend an afternoon.

One of the interesting things we observed was that ther running water over the rocks was moving UPSTREAM. So obviously the tide was quite high. We would assume as the tide drops, the water runs back out over the rocks. 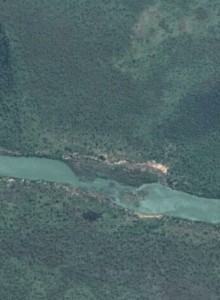 I had a beer with a young bloke I know named Ash at the King Ash Bay bar last night. He is from in town at Borroloola and has been in the area for 20 years (pretty much his whole life). He says the rock bar used to be called “Croc Crossing” and that back when this area was a cattle station, they would cross cattle there at low tide.

The cattle are long gone, but there is still plenty of animals around. Near Batten Creek on the drive back to King Ash Bay, we stopped in a sandy section. There were all kinds of tracks in the sand. Buffalo, pigs and dingos.

In summing up, it was a great way to kill a couple of hours and its somewhere we will definitely go back to for a drive another day.

« Navionics iPhone and iPad App Review
What is the best time of year to go Barramundi fishing? »